The Fed Fund Rate is Zero! What does that Mean?

You may have heard that the fed fund rate has been dropped to zero- and you may wonder what that means! I’ll say that it may sound better than it actually is! 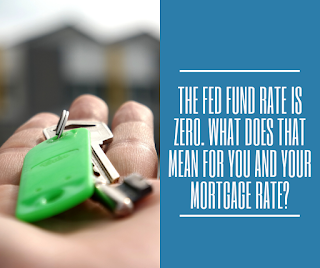 The fed fund rate is basically the rate at which banks and lenders lend money to each other. So, your bank may be able to borrow money for no interest, but that doesn’t mean that they won’t charge you interest on your loan!

During the recession, the fed fund rate was 0 from 2009 to 2016 and interest rates were int he 4.5% range during that time, so don’t be concerned that we are at 0% right now- we have clearly been here before!

Mortgage interest rates will follow and be affected by the fed fund rate, but they change more gradually and aren’t as volatile, as the fed fund rate can change overnight from a single policy change while mortgage rates tend to be adjusted due to many factors.

When the fed rate began to be dropped in early 2020, mortgage rates dropped correspondingly and many refinanced their homes. When that happened, the market was swamped with refinances and people wanting to hurry and close on loans, so the mortgage interest rate actually went up a little bit because they had too many people wanting too much money at once.

While the mortgage rates follow the fed rate, we won’t ever see mortgages at 0% interest- so don’t be tricked there! But, when banks can borrow money for free, it does allow them to drop the rate of interest that they charge consumers, so you can get lower interest rates on your mortgage.

If you want to know if it’s a good time to buy and take advantage of the low rates or if you should consider refinancing, just ask me and I can help you figure out what would be the best deal for you! I work with the best lenders in Utah and Salt Lake counties and they can give you expert advice that benefits you!