The TRUTH about ‘For Sale by Owner’ Homes 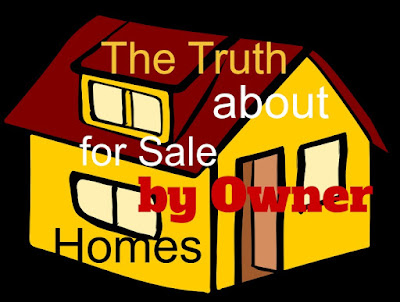 Let me preface this by saying that I know I’ll be in hot water with some other Realtors for discussing this topic, but it’s something that I feel strongly about and want to share with those who are outside of the industry.

I’m a stats girl, so let’s start with the statistics on this. Nationwide, 7% of for sale by owner homes sell. Meaning that for every 100 homes that someone decides to sell on their own, a mere seven actually sell. In half of those seven percent that DO sell, the person BUYING the home is a family member/friend. So, let’s say you decide to throw up a sign in your yard and sell your house on your own. If you don’t know someone beforehand that wants to buy it, you’re looking at a 3.5% success rate.

I often have clients come to me and say, “Oh, I’m going to sell my house, but I think I’ll sell to my my friend/brother/neighbor, etc…” When that happens, I always assure them that I’m happy to step out of the picture and allow them to list and sell on their own…. but in almost every scenario, that person who was interested wasn’t in a position to buy and I ended up listing and selling the home for my client.
Now, let’s get into my industry a bit and tell you about things from a Realtor’s side. This is what may put me into hot water. There is an entire prospecting method about marketing to for sale by owners. Most home owners don’t realize how complicated of a process selling a home is, they don’t see the value in a Realtor and certainly don’t want to pay 6% of their home sale simply to get their home sold. After trying their hand at it on their own (usually for about 30 days), 93% of for sale by owners will decide to hire a Realtor to get their home sold. Which is fine…. but all too often, a real estate agent will use misrepresentations to get that listing. One prime example is a phone call that will follow along the lines of, “Oh, I have a client who might be interested in your home, but I need to see it first to know if it’s what they want…..” More often than not, this isn’t the case. They simply want to get into your home to convince you that they’ll do a better job of selling it than you will.

I’m happy for someone to get a good Realtor to sell their home and save them a lot of stress and effort- but I’m not happy about anyone in my industry using misrepresentations.

Now, when trying to sell your home on your own, the National Association of Realtors has found that incorrect pricing is the  biggest obstacle to overcome. That’s because the market is constantly changing and even an active Realtor who sells a half dozen homes in a year will likely have difficulties in correctly pricing a home.

Utah is a non-disclosure state, which means that without professional resources, you don’t know what homes in your area are actually selling for. You can get ballparks and estimates until you’re blue in the face, but you don’t have access to hard, real data on home sales in your neighborhood. If you want to refer to Zillow, they have some of the worst overpricing in the industry.

Let’s say you price your home. It’s very likely you’ll price it too high (which I hear and think, *phew*- you’re safe- because an over-priced home will almost never sell and you’ll be safe from losing money!). There’s also the possibility that you’ll price it too low and miss out on thousands of dollars because someone will be more than happy to snap up an under-priced home in today’s market.

Sadly, their are seminars taught on how to take advantage of for sale by owners who price their homes too low and how to trap them in a contract that will ultimately lose the owner money. They lose money not only in the actual sale of their home, but also with very specifically drawn up contracts that will eventually force the owner to cancel (once they realize that they are priced too low), causing a breech of contract and a payout for the ‘buyer’ since the owner had to cancel.

If you know exactly who you’re selling to and that other party is ready and willing to buy, a for sale by owner may be for you. If you’re just looking to save on paying for an agent, let me assure you that in nearly every home I have sold, my client has walked away with MORE money in their pocket than it cost them to hire me.