Case Study: Who You Hire Matters

There are lots of options when it comes to hiring a Realtor. You can hire your friend, your neighbor, someone you don’t know, a professional, and so on. There are TONS of options out there and it is actually surprising how many Realtors there actually are.

I thought I would share a case study of a couple of recent sales I have done where someone hires what is called a discount service or a limited service. What that means by discount service is that they do a very high level of volume of transactions. By doing a higher volume of transactions they can charge a lower commission but what ends up happening is because they are doing such a high level of transactions, they don’t typically sell their houses for as much money. So you are paying less to sell your house but are you making the same amount of money if you would have hired a full time Realtor?

Here are the numbers from those sales I have done:
We will say ‘House A’ and ‘House B’

So for House A, I was the listing agent, and House B was listed by another company and the houses are very comparable. Both houses are in West Jordan, they were both built within the same decade of each other and they both have basement apartments. One house had a third car garage, which does add value to that house and the other had 600 square feet more which adds value there. In the world of comparing houses they would be very comparable.
House B was listed in August, sat on the market and sold in April. House A was listed in April and sold in April. When I listed House A we had multiple offers and we were able to sell the house that same month. Even though House B was listed at the same time, it didn’t sell until April and that caused the sellers to have an additional 8 mortgage payments, and that comes out of the net of what they eventually sold for.
House A was listed at 395K, and because of the marketing, staging and photography we ended up getting multiple offers and we sold it for 412K.
House B was listed originally for 424K, and it finally sold after 8 months at 384K.
If you look at the math, The owners of House B paid a buyers agent 3% to bring a buyer to the home, and then they paid a flat fee to the company that sold their house. The net of House B ended up being 370K.
House A, sold for 412K. I had at a 6% listing meaning that I made 3% and I shared 3% with the buyers agent and we did not pay any of the buyers closing costs. My seller ended up netting 387K.
So even though we had very similar houses, my seller made 16,300 more selling their house with me.
That house was a little trickier to sell, when it comes to basement apartments, some people love them and some people hate them. So, I thought to be fair I would look up another cause that was easier to sell and an easier process.

We will call these, ‘Condo X’ and ‘Condo Y’
Both were condos in Saratoga Springs, located in the same community, built around the same time, and listed within the same time frame. Both were listed in August and both sold in September. We listed Condo X for 207K, we got a full price offer, didn’t pay any closing costs, went under contract, and sold. Condo Y that was listed by a discount service, was listed for 204K, and they didn’t sell until they got down to 198K. One thing I noticed with their listing is that they did have the wrong square footage, which does make a big difference when it comes to selling a house, because there is a lot of price per square foot. I think Condo Y went under contract for their list price, but it didn’t appraise because it had the wrong square footage in the marketing material. That is something that as a listing agent, if that were to come up I would have the appraiser re-measure it and re-adjust. That doesn’t always happen, but it is a small thing that makes a big difference. At 169$ a square foot, missing 100 square feet is huge.
Condo Y sold for 198K, they paid a buyers agent 3% and then they paid the company selling their house a flat fee. They ended up netting 191,500.
My seller in Condo X sold for 207K, and we did the same as last time with a 6% listing split between myself and the buyers agent, and that was 12,000. Our seller ended up netting 194,580.
Even on a property that should be easier to sell, and their shouldn’t be as big of a difference, my client still made 3,000 more than the other seller. Even with the full 6% commission, as a professional we can still get our clients the better deal.

How do we do that? I have a whole process that I use and apply on how to sell my clients house for top dollar with the least amount of stress. It starts with getting the house ready before you ever put it on the market. There are a lot of houses for buyers to look at right now, and if you don’t look fantastic or have a well organized online presence buyers aren’t going to pay your property any mind. You only have about 15 seconds to capture and engage buyers through your online presence. 50% of buyers find the house that they bought online. I still have a marketing plan for that other 50%, so who you hire matters to make sure that your home sells for top dollar.

Look for reviews and an agent with a good reputation. What their reputation is in the industry makes a big difference. Especially if they are going to get multiple offers and bring the right buyers. Never hire someone who won’t put your best interests first.

As a professional full time Realtor myself, I am in the office 9-5, Monday-Friday and often times longer, and I spend Saturday’s showing homes. When I am showing homes during the week I work after 5. I am in this daily and constantly involved in the market.

This is a large and fast paced industry. You need to find someone who can keep up and make you the best deal. Reach out to me if you have any questions or if you are thinking about selling your home, I would love to help out. 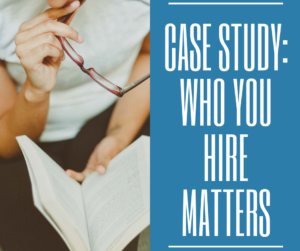